I loved the movie Wonder Woman. I’ve been waiting for it my entire life. See.

(Mash up of Wonder Woman and Spider Girl, with facial hair of course. 🙂 ) 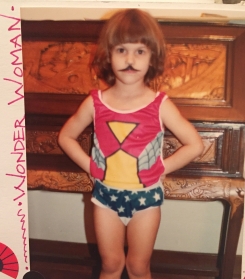 With all of this hype about the release of the DVD, I’m reminded of when I dissected the storyline. The very first time I saw the movie on opening day, I noticed how it followed the Save the Cat story structure by Blake Snyder. It really clicked at the “High Tower Surprise” moment and then all of the other beats fell into place.

My family knows I’m a pretty tough movie critic and so they always ask me what I think afterwards. Wiping the remaining tears, I whispered, “it was perfect.” Then I proceeded with an avalanche of words at why the story, to me, was so perfectly told. The fourth time I saw Wonder Woman in the theaters, it was so apparent that it followed Save the Cat, I brought a timer and timed when all of the beats hit.

I’ve been using the Save the Cat method for several years now. Here is a detailed Blog Post I wrote about marrying Save the Cat and the Scrivener writing program. It’s the same structure that my critique group uses when we discuss our manuscripts. Pinpointing the obvious beats in Wonder Woman has helped me define more clearly my own stories.

Here are the beats along with the times that they hit. (Obviously there are massive spoilers below because I’m outlining the whole movie.) People who use Save the Cat, what do you think?

Opening Image: first 9 minutes. Shows her as a child and shows her determination.

Theme Stated: 9 minute mark of the movie. I think the goal is “You are stronger than you believe.” They say it right when when she is looking at the sword. But I think the theme of the movie is, “Love will save the world.” She says it several times toward the end.

Set – up: everything before 14 minutes. Time at Themyscira, training, her growing up. Also, the bad guys are introduced. Show how and why Diana needs to change to win. Show what she’s lacking. The calm before the storm.

Catalyst: This hits right at the 14 minute mark. The catalyst is the first moment when something BIG happens. And that moment is when Diana witnesses the plane crash into the ocean. Then the fight on the beach follows. Life changing events.

Debate: 30-36 minute marks. Should Diana go to the world of men? There is an actual debate in front of her mother. The Debate moment is the last chance for the hero to say “this is crazy.” Should I go? Do I dare? Moment of truth. Make a firm decision and off she goes.

B Story: 40 minute mark. The love story portion. The story that carries the theme (Love will save the world) of the book. Diana holds hands with Steve Trevor, she sees a baby, walks through London taking it all in. B-story is a breather. Can introduce a brand new bunch of characters.

Fun & Games: 45 minute mark. This is such an obvious beat change. We take a break from the stakes and see what the idea is all about. The music even changes, the lighting is brighter, the tone is lighter. This is when she eats ice cream, tries on the different clothing, fight in the ally. Gathering the team in the bar. Asks about plan.

*We see the bad guys again. Also, the tone starts to change again after the fun and games leading up to the mid point. This changes because we see the affects of the war. And the bad guys kill the generals with poison.

Midpoint: This hits exactly at 1:08 (one hour eight minutes mark) It is almost exactly the time of the movie cut in half, which is 2 hours 21 minutes long. Stakes are raised at midpoint. This midpoint moment is when she is climbing up the stairs, in her armor, up into the war and no man’s land. Epic music blares. She pauses–just so we see how awesome she is! And she is. I swear, this is about when the tears started flowing for me. It was a rally cry. This is when I knew, just knew, that women in movies would never be the same. I would’ve followed her into the war, that’s how powerful this scene was to me!

*Then coming off of the midpoint we see a false defeat. A & B story start to come together as they dance and kiss.

Bad guys close in: 1:22 (one hour twenty-two minute mark) This is the Gala. The Dance. Then the bad guys and bombs and gas hit at 1:25. Wonder Woman follows Ares.

All is lost: 1:33 She kills Ares, but why are people still fighting? Diana is distraught. All is lost moment is a false defeat. All aspects of the hero’s life are in shambles.

Break into Three: 1:41 – A and B story intertwine. An idea to solve the problem has emerged. This is when Diana is bound and watches as Steve stops the bomb with his plane.

Act Three, finale begins – 1:48 (gathering team, execute plan, high tower surprise, dig down deep, execute new plan) High tower surprise. The setting is set on a high tower–perfect! The surprise is that she killed the fake Ares. The true one rises up. Here is the “men are evil” debate. Flashback to the Gods. God killer. You are broken. Wonder Woman has to dig down deep. Then her full powers come. Theme is stated, again. “Love will save the world.” And ta-daa, it did! I also loved her badassery when she was fighting Ares! So so good.

Final Image: 1:58 -(one hour fifty-eight minutes) The final image is opposite of the opening image. It is your proof that change has occurred and that it’s real. So instead of her being surrounded by her family in Themiscyra, she is surrounded by humans in a crowd after the war. She smiles at people kissing on the streets and then she sees a photo of Steve–both images are another nod to the theme. Then there is a bonus final image of Wonder Woman looking at the black and white photo of her friends. She says the theme, “Only love can truly save the world. So I stay and I fight and I give.”

Well, what do you think? Do you agree with the beats? I would love to hear and discuss with you. Now excuse me while I go pop some pop corn. . . I’ve got a movie to watch.